I couldn't think of what to call this. I told the kids we were having green bean bake. You know, green because of the cilantro rice and beans because of the chipotle beans. But, they were more thinking of the traditional Thanksgiving side dish and were not impressed. You should have seen their relief when I pulled this bubbling cheese covered black bean and cilantro rice out of the oven.

This is a perfect weeknight meal and a great option for meatless nights. To save time, make the rice in the rice cooker, whip up the cilantro sauce, and chop the veggies. All that is left is a bit of assembly and a short baking time (25 minutes). 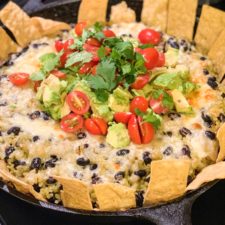 For the cilantro sauce:

I tried this twice--once with beans straight out of the can (drained and rinsed) and the other time with cooking it with a bit of chipotle pepper.  Both were great!  I just really love the chipotle pepper flavor and it doesn't take much longer to do.