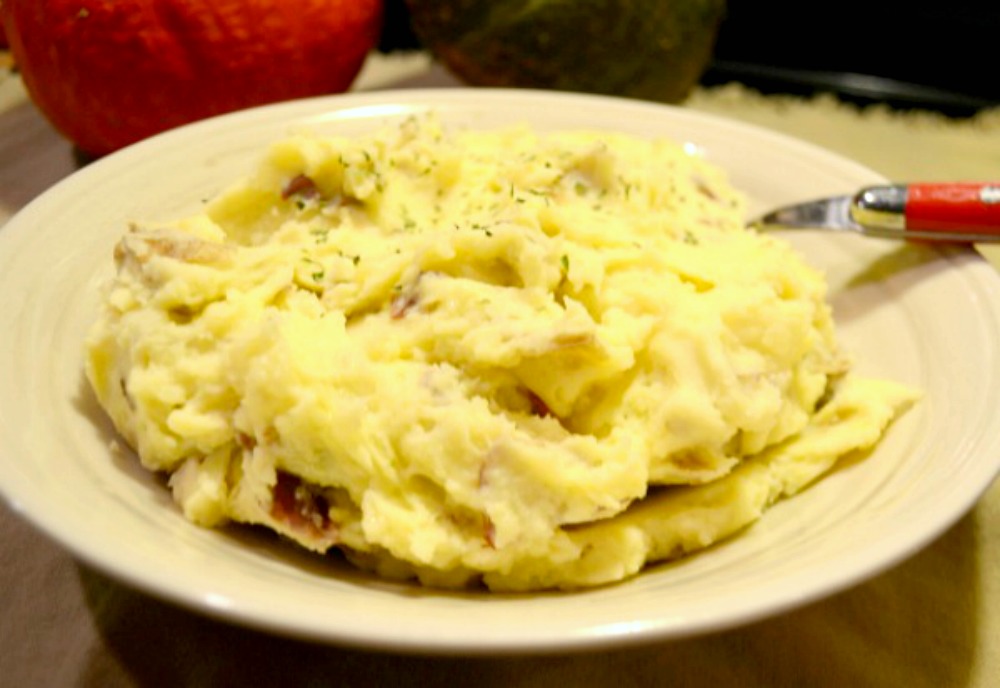 I once brought these to an office party and they were thoroughly enjoyed by the whole group.  Later, my BOSS came up to me and asked, "What were those lumps in the mashed potatoes?"  Embarrassingly, I replied, "ummm....potatoes".  The next day, he brought me a mashed potato ricer and told me that was the key for him to making the smoothest mashed potatoes.  It was a game changer for sure.  If you don't have a ricer, that's OK.  Just make sure to whip the potatoes long enough to be sure to get out all of the lumps.

One question that comes up every time I make mashed potatoes is whether or not to include the peels in the final product.  Traditionally, you wouldn't use the peels but the peels provide fiber and nutrients that you wouldn't get from the potato itself.  Sometimes I chose to include some of the peels (for that extra fiber!) and sometimes I don't.  It really is a mood thing.

One of the best thing about the ricer is that it is helpful in getting the peels off.  I hate peeling potatoes!   Instead of peeling them before I boil them, I wait until I push them through the ricer.  As you push them though, the peels slide off.

Alternatively, you could peel the potatoes before you boil them.  Then, you can add to the stand mixer (using paddle attachment) or a potato masher (sometimes the old fashioned approach is the best).

I find that vegan and vegetarians really like these because of the added flavor.  The recipe is easy to veganize using nut or soy milk (unsweetened!) and vegan butter (I like Earth's Balance buttery sticks).

I hope you enjoy these!  They regularly grace our table year round but especially at Thanksgiving.