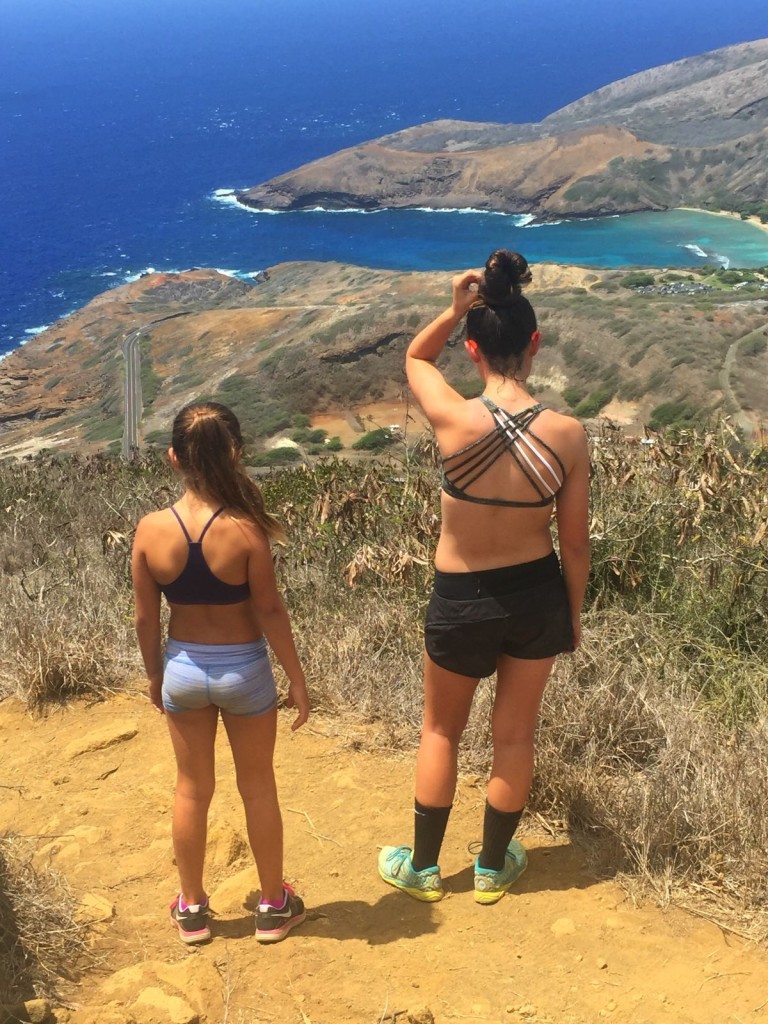 On our recent trip to Hawaii, the only thing I wanted to make sure to do (besides eat at lots of great restaurants) was hike.  On Kauai, we didn't get a lot of hiking time because I was so busy preparing the meal with the paddling clients.  Plus, a hurricane was coming and our mind was elsewhere.  On Oahu though, we got at least one little hike in every day.

On the last day, we decided to tackle the infamous Koko Head Stairs--in Hawaii Kai.  These "stairs" are not really stairs at all but a long, hot, dry, trek up the side of Koko Head Crater.  Instead of stairs, the path follows a set of railroad tracks that was built into the side of the mountain for an unknown purpose (someone probably knows, but I don't).   We got a late start (after a great breakfast at Town, one of my favorites!) and didn't start hiking until close to 11 am.  By then it was getting HOT.   I had hiked it with my mom about ten years ago in 30 minutes... and thought this was going to be easy going.  I was wrong.

Ten years ago, I didn't attempt this with my children.  Children that complained and complained until the very end (even the down slope). Granted, it is very tough!  But, their complaining just made my mental game weaker and it was already weak to begin with.  If you look at this picture, it might not seem that bad but look towards the back of the picture and you can see how steep it starts to get.  By the time you get to that point, you are feeling like you are close to the end.  But it is a trick.

We took lots of breaks to take in the sights, catch our breath and just hope for a gust of cool wind.  Aaron couldn't be bothered by our slow pace and just headed for the summit.  I think he got there a good 30 minutes before Sawyer and I.  Sawyer was so kind--staying with his mom, even though he could have easily jogged up.

Nova and Cousin Mary had some surge of energy at the end and just went for it.  I think at a certain point Nova realized the only way to go down was to get up and all of her complaining wasn't going to work.

At the top the views are amazing.  Hawaii Kai to Diamond Head on one side.  Hanuama Bay in the middle and then behind us the view into Koko Head Crater, Sandy Beach, and the coastline towards Makapu'u Lighthouse.

The end is definitely rewarding!  What a sense of accomplishment!  Way to go people!  (Sawyer refused to be photographed at this point.)

I liked this little sign at the top!  Even though I don't love this picture of myself ( it did inspire me to get a Brazillian Blowout and step up my CrossFit game), I am proud of me!  This is a hard hike for anyone at any fitness level and I'm glad we all pushed through it.

For something a lot easier but very cool as well:  Check out the Makapu'u Lighthouse Hike.